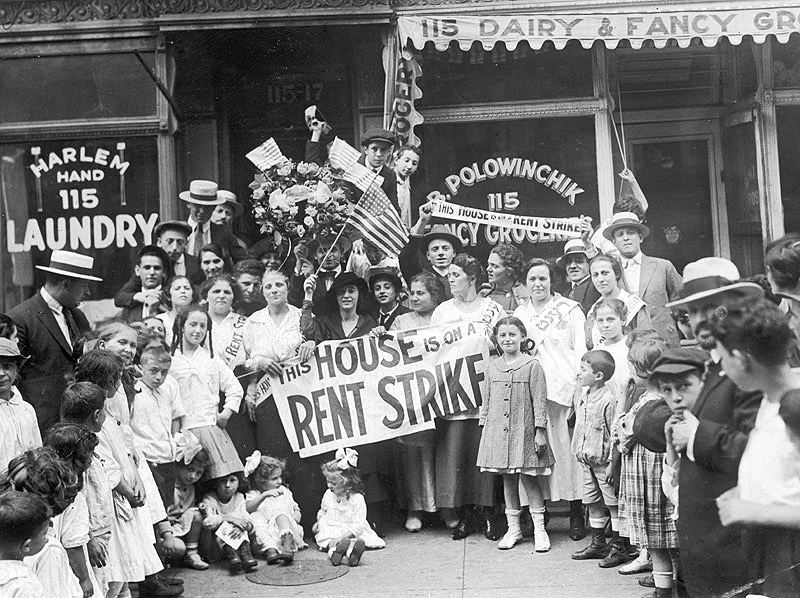 When social social distancing restrictions began (and especially during the curfew period in June), many NY residents were forced to spend their time in crammed and unhealthy apartments. Many were threatened with evictions because they were laid off and couldn’t pay for the next month. How did people deal with this terrible situation?

Tenants got organized! In the last seven to eight months, we have seen an explosion of tenant organizing in New York State. There are new and growing tenant unions in every corner of the State, and they are taking more radical action than in prior years to demand housing justice.

We started by calling for an Eviction Moratorium [1], which we won. That luckily took the pressure off and gave people the capacity and time to organize rent strikes. Today the Eviction Moratorium has expired, though, and we are going to transition to eviction defense and blockades.

With Covid-19 came a new visibility of social problems. One was the shortage of affordable housing. You have long been aware of this problem, which is especially severe in NYC. Can you frame the major causes and effects and their extent for us?

We’ve been saying for a long time that the majority of tenants are just one paycheck away from an eviction, and when the COVID-19 crisis hit and so many lost their employment, that reality became visible to millions of people at once.

I think the crisis is caused by a prioritization, in New York and in the United States, of property rights over human rights to housing; deregulation and an over-emphasis on the private market and real estate industry as the most important driver of housing policy. Our reliance on housing as a private good and a means to acquire wealth has stopped us from seeing housing as what it truly needs to be: a social good, and a home.

How long has »Housing Justice for All« (HJ4A) existed, and how did it start?

»HJ4A« was formed in 2017 in Albany, New York. It’s a coalition of over 80 tenant groups that represent tenants and homeless New Yorkers. The real estate industry is the most potent force in New York State politics – we knew that organizing local groups across the State into a powerful, unified network was the only way to combat that. We’ve been tremendously successful and created a voice for tenants and homeless New Yorkers in Albany.

How have you adapted to organizing under social distancing restrictions?

Because we are a geographically dispersed network, we were already used to meeting on Zoom. Now we’re just doing it more. We are providing more one-on-one mentoring with organizers and tenant leaders to get organized locally – even from far away.[2]

A rent strike seems risky to participate in. It only works if a large number of tenants join. What are your organizing methods?

While rent strikes are certainly risky, they are no more risky than the situation we are currently in. Right now, no one can pay their rent at all, thanks to massive layoffs and unemployment. So people have a choice – they can not pay together, with us, or they can do it alone. A strike is actually a safer option under the current conditions. Of course, that is starting to change as the economy re-opens and people are beginning to go back to work – and maintaining the rent strikes is always the hardest part.

As for the organizing, it’s quite simple. Talk to people, door by door, building by building. Create trust and community. Agitate. Don’t be afraid to make hard asks of your neighbors. Make a good list of everyone who lives in the building or neighborhood, and find out why they want to be involved in the housing movement – everyone has a reason, even if you don’t know it yet! Get to know your neighbors. And most importantly: Follow through on your commitments!

What’s the goal of a rent strike, if not just stopping to pay rent for the moment?

The goal of a rent strike is to use our collective, economic power to force the landlord to bargain with the tenants over anything — rent payments, living conditions, or more. Throughout history rent strikes have been used to win public policy changes, as well — this works when many buildings across a city or State join together in not paying rent. They are an expression of collective power!

The Rent Strike Toolkit states that “if the landlord thinks you’re on rent strike because you can’t pay rent, he has little incentive to make repairs or meet your demands.“ Has the pandemic changed the way leverage works in a rent strike, since the impetus for rent strikes is not lack of repairs, but massive unemployment and inability to pay? Does that help landlords or tenants more?

A COVID-19 rent strike is certainly unique. As the real estate market weakens, landlords have a big incentive to keep tenants who currently live in their properties, in their homes. That’s the power of the rent strike in this moment.

You decided to use history as a major argument in your Rent Strike Toolkit. How come?

History is the best teacher! There is a long and storied past of housing justice organizing in New York – we have so much to learn from years of tenant resistance, and we must!

What are your suggestions on how to solve the housing crisis?

We need to reduce the influence that private profit has on the housing industry; we need to fight for a vision of social housing that includes renters’ rights, shared equity, and community over individual wealth building. This means investing in our public housing stock, building new public housing stock, and taking back buildings from speculative landlords.

You suggest the Tenant Opportunity to Purchase (TOPA) as one means to solve the housing crisis. Are there processes like this going on right now?

New York State has a long history of limited equity cooperatives and community land trusts. The most visible of these are the projects like Co-Op City and Penn South; however, the reality is that there are thousands of smaller limited equity co-operatives all over New York. In the 1970s and 80s, during a period of deep divestment, tenants in neighborhoods like Harlem, Crown Heights, and the South Bronx, came together to take over their buildings from landlords who had abandoned them. That’s the legacy of housing organizing in New York and that’s what we are fighting for today.

Our current market conditions are, of course, quite different. However, COVID-19 is changing things – and we know that TOPA is only successful if it comes with a deep public subsidy to keep housing affordable for the collective community, permanently.

Do you see yourselves as part of a broader community of different housing groups and anti-gentrification groups in New York?

Yes! »HJ4A« is a network of over eighty groups that represent tenants and homeless New Yorkers in their struggle for housing as a human right. The groups in our network are all different – some are hyper-local, grassroots tenants’ unions, while others are multi-city, multi-issue advocacy organizations with over forty staff members.

Our goal is to be more than the sum of our parts. We are working to identify a vision, and a shared path forward, that all groups see themselves in that advances a human right to housing in New York State.

What are your immediate and long term goals going forward?

The most important thing is to make sure that those who have recently gotten involved in the housing justice movement during the COVID-19 crisis stay involved. While millions are understanding that during a pandemic, evictions are violent, we believe that evictions are always violent. We need to shift that popular understanding, and get more and more people involved in fighting for a better world.

Long term, it is nearly inevitable that the real estate market will restructure itself in response to the COVID-19 pandemic and the inability of so many to pay the rent. Given that, there are three paths forward.

In the first, New York State fails to act at all. We will face mass evictions and homelessness as millions cannot pay rent. Smaller landlords, unable to maintain their buildings, will exit the housing market—leading to further consolidation of the real estate industry by finance capital. We have reason to expect that this is beginning to happen.

In the second path, New York State acts to protect the interest of landlords, like through a voucher-based rent relief program. This will cost billions of dollars, will avert mass evictions, and alleviate the immediate and urgent pain that many tenants face. However, it will also entrench a market-based system of providing “affordable” housing, entrench the existing and exploitative landlord-tenant relationship, and serve to bail out landlords, not renters. This path is preferred by the existing real estate industry, and by most Democrats in our State Capitol and Washington.

In the third path – the path preferred by »HJ4A« – we leverage this crisis to build on the victories of 2019, and further de-commodify housing and land. This can be done through canceling rent, closing eviction courts, and, as landlords exit the market, using State action to acquire properties and leveraging disinvestment to convert thousands of homes into publicly and democratically controlled land and housing.

Is there anything else you think German readers should know about »HJ4A«? Anything you’d like to say to them?

We’re very inspired by the German housing justice movement – to municipalize housing owned by large corporate landlords, and some of the strongest rent control laws in the world! Thank you for all your work – we are following closely!

[1] The Eviction Moratorium was signed by NY-governor Andrew Cuomo and prevented tenants from being evicted throughout the first period of the pandemic.

[2] (Community) Organizing has a long tradition in the United States that goes back to the 1930s. Its major thinker is Saul Alinsky. The concept employs specific methods to achieve collective power from within communities to effect political change. These methods, such as active listening and canvassing, are taught by experienced organizers to local activists who want to organize their communities.

Kathi King writes her PhD-thesis on African American women writers in the New Deal era at Freiburg University. She is a member of the Común editorial team, an activist for Solidarity City Freiburg, and a musician.

Adam Finchler is a musician and a graduate student in special education in Brooklyn, NY.

This interview has been shortened and edited for clarity. A translated version (German) can be found in Común #4.